Cameron was established as the permanent county seat of Milam County by the First State Legislature in May 1846. The town was named for Captain Ewen Cameron, a Scot Highlander prominent in the Texas Revolution and a member of the Mier Expedition during the war with Mexico. The town of Cameron was small village before Sam Houston liberated Texas in the Battle of San Jacinto. In 1881, the Gulf, Colorado and Santa Fe Railroad constructed a line through Cameron connecting the Gulf Coast with Fort Worth. Another railroad, the San Antonio and Aransas Pass was completed in 1890 increasing the population and adding impetus to the agricultural economy of Cameron and the surrounding territory.

A small town in the rich agricultural area of Milam County, Cameron was settled by diverse groups of pioneers in the 1840's. It is not unusual to hear Czech, German and Spanish—mingled with distinctive Texas drawls—still being spoken by some of Cameron residents.

Milam County, named for Texas patriot and independence fighter Ben Milam whose statue is on the courthouse grounds in historic downtown Cameron, was created in 1836 as one of the original 23 counties of Texas. The first settlers in Milam County were primarily from Kentucky, Tennessee and Louisiana, coming to the county in 1834.

You might also want to let your fingers to the walking through history at http://www.milamcounty.net/page/milam.histcomm

A is a fully restored Victorian house, which was the home of prominent citizens in Cameron for over a century. Built in 1895, it has won the Great American Home Award from the National Trust for Historic Preservation. The Texas Historical Commission has called it "the finest home of its size and type in the country."

The Bridges of Milam County

Some of the county's 100-plus steel bridges from 1900 era are still in use today. Brushy Creek Bridge once spanned Bushy Creek south of Thorndale, was moved to Cameron's Wilson-Ledbetter Park. A bridge over Little River by Sugar Loaf Mountain is still in use. 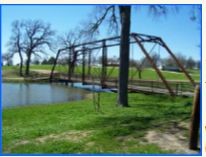 Milam County's cemeteries provide a look into the past in this historic county.

Cameron resident John Johnson has created a model of Cameron that recalls the town as it looked during the 1940s.

Local artists helped capture our heritage and preserve it on the walls of some of our downtown buildings.

The Milam County Historical Museum consists of two buildings.  One is housed in the restored county jail, c. 1895, complete with cells, shackles, and gallows tower, located at 201 E. Main. Exhibits include pioneer farm and ranch equipment, rustic household furnishings, Spartan "fashions" of the frontier, Indian artifacts, ranch and trail-driving tack, cowboy gear, and weapons. The other is located at 112 W.1st Street with many exhibits of life in Milam County.  There is also a small genealogy section.

This park is one of 9 parks located in Cameron. Wilson-Ledbetter is a lush and beautiful 25-acre city park with picnic areas, hike & bike trails, site of historic Brushy Creek iron bridge, and home to many species of wildlife. Visits https://www.camerontexas.net/Facilities for information on the other parks and recreation.